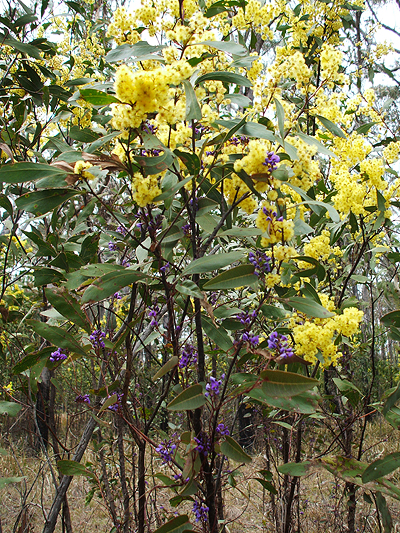 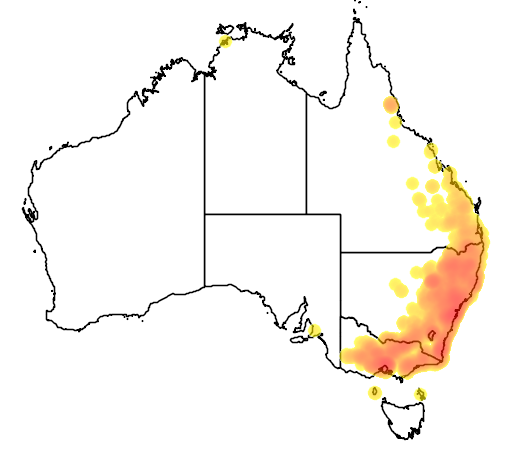 Meaning entangled, referring to the pods.

Widespread, in most catchments and districts.

Distinguished from Blackwood (A. melanoxylon) by its longer, sickle-shaped "leaves", different flowering time and habitat (although they occasionally grow together). Funicle (ovule or seed stalk) is cream and folded under the seed in Lightwood, and red, encircling the seed in Blackwood.

Mid-spring to autumn. Seed may take 11 months to form. Monitor regularly, as seeds dropped soon after maturity. Dust from pods and other debris can irritate.

From scarified seed (±28 viable seeds per gram). Pour boiling water over seed and soak for several hours before drying and sowing.

By root suckering, from soil-stored seed after disturbance, such as fire, ripping and ploughing, and from cut stumps. Disturbance reduces competition for moisture and light, and enhances germination. Establishes well when direct seeded.

Hard, close-grained, dark-brown with yellowish lines. Similar quality to Blackwood (A. melanoxylon) timber. Takes a high polish, and is interesting for turning and cabinet work. Bark useful for tanning.

Excellent habitat. Insects, such as ants, and birds, including parrots and native pigeons eat seed. King Parrot eats half-ripe seed pods. Because it flowers when other flowers are scarce, provides valuable pollen for many insects, including wasps which parasitize pasture grubs. Insect-eating birds also attracted. Galls, formed by wasps, provide habitat for other insects. Grubs in bark provide valuable food for birds including the Black-faced Cuckoo-shrike. Excellent roost sites for birds.

Attractive summer-flowering ornamental and shade for gardens and rockeries. Shallow roots do not interfere with utilities or raise footpaths. Suckers if cut back severely or if roots are damaged. Susceptible to snails when young.

Leaves produce yellow dye with alum, and brown dye when copper is used as mordant.