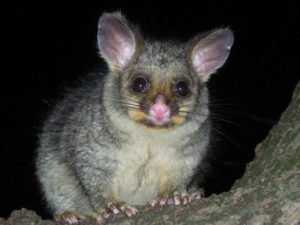 A native nightlife stakeout was held on Saturday 24 September at 9 Mile Reserve Table Top. Over 100 people registered their interest in attending however there was a cut-off with numbers having to be kept to 50. The ages attending ranged from 2 to over 62 years with people coming from across the whole Table Top region.

The night began with Dr Damian Michael giving a us a brief introduction to his work and what we may see during the evening. Small groups were then left at chosen trees with hollows and we settled in to see if anything may exit, unfortunately so did thousands of mosquitoes. A hard lesson was learnt that when you are offered insect spray from the expert, namely Damian - take up the offer!! A few sightings did occur at the 'stakeout' trees. Four gliders left one spot and another flew in. A few individual gliders were spotted at other trees and a number of bats.

We were then all collected by Damian to wander the reserve under his guidance. Though the groups ranged in ages, and no monkeys were spotted on the night, respect and interest to other participants and the inhabitants of the reserve, was shown by all. The event only ran from 5.30 to 8.30pm, however it seemed like we were really transformed into a different world for much longer! We are sure the night will be well remembered by all those attending and if you see any lights in your nearby reserves, hopefully they are curious future environmentalists!

Congratulations to the team for pulling off this great first event in the Table Top area. It seems a definite on the calendar for another time! Many thanks to Dr Damian Michael for his time and enthusiasm, Thurgoona Woolshed Landcare Group for their assistance in organizing, advertising and financially supporting the event, Albury Environmental Lands  for allowing the event to run in the 9 Mile reserve.

The final tally for the evenings stagwatch and spotlight survey were:

11 Squirrel Gliders (9 during the stagwatch and two spotlighting)