Categories: All families, All Flora, All Genera, Allocasuarina, Casuarinaceae 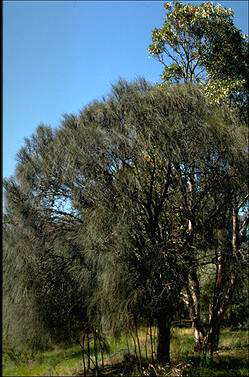 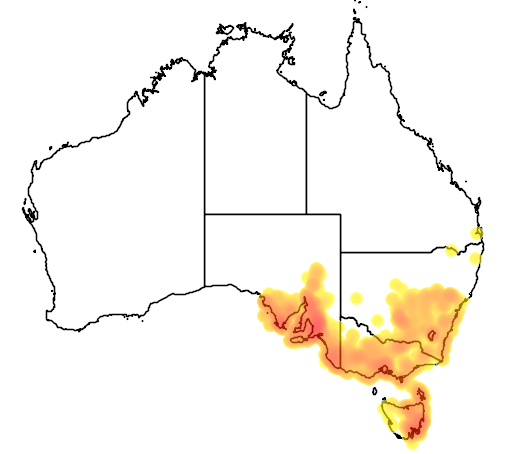 Allocasuarina, from Greek allo, other, and casuarina, referring to differences between Casuarina and Allocasuarina species. Verticillata, from Latin verto, I turn, in reference to leaves arranged in whorls, or seemingly so. Sheoak -named because wood is tough, durable and attractively grained, like European Oak.

Quite widespread through most areas on the drier hill/rocky outcrops.

Distinguished from Bulloak (A. luehmannii) mainly by its larger cones, drooping habit and different habitat.

Generally throughout the year, as seeds retained in cones on trees for long periods. Collect cones when brown and full-sized, with valves still closed. Dry cones in paper bag to facilitate seed release. Sieve to separate from cones. Store seed in refrigerator to maintain viability, or sow fresh.

From untreated seed (120-270 viable seeds per gram), which should germinate in 2-5 weeks at hot temperatures (up to 500C). Pale foliage and poor growth may result unless seedlings innoculated with soil bacterium (Frankia spp.) that can be obtained from the roots of parent trees. The bacterium occurs in fleshy and coral-like root nodules just beneath soil surface. Dig up small quantity of nodules and grind using mortar and pestle. Dilute in watering can and water seedlings.

From root suckers and seed. Also coppices to some extent. Highly palatable to livestock and rabbits, generally requiring protection to establish. Root suckers can be transplanted during winter when soil is moist. After fire, trees with burnt tops coppice, shoot from roots, or produce new crown shoots if damage is not severe. Establishes well when direct seeded.

Reddish, heavy and easily split, machined and polished. Used as firewood and in turning. Was used for wheel spokes, bullock yokes, axe handles, staves, shingles, cabinet work and mine props. Durability in the ground is reduced under alternating wet and dry conditions.

Boomerangs and digging sticks made from wood. Young shoots and cones were occasionally chewed or eaten.

Attractive foliage and bronze-coloured male flowers make this a useful specimen, particularly attractive in groups. Furrowed bark excellent for growing orchids on. Do not plant within 3m of plumbing to avoid clogged drains.